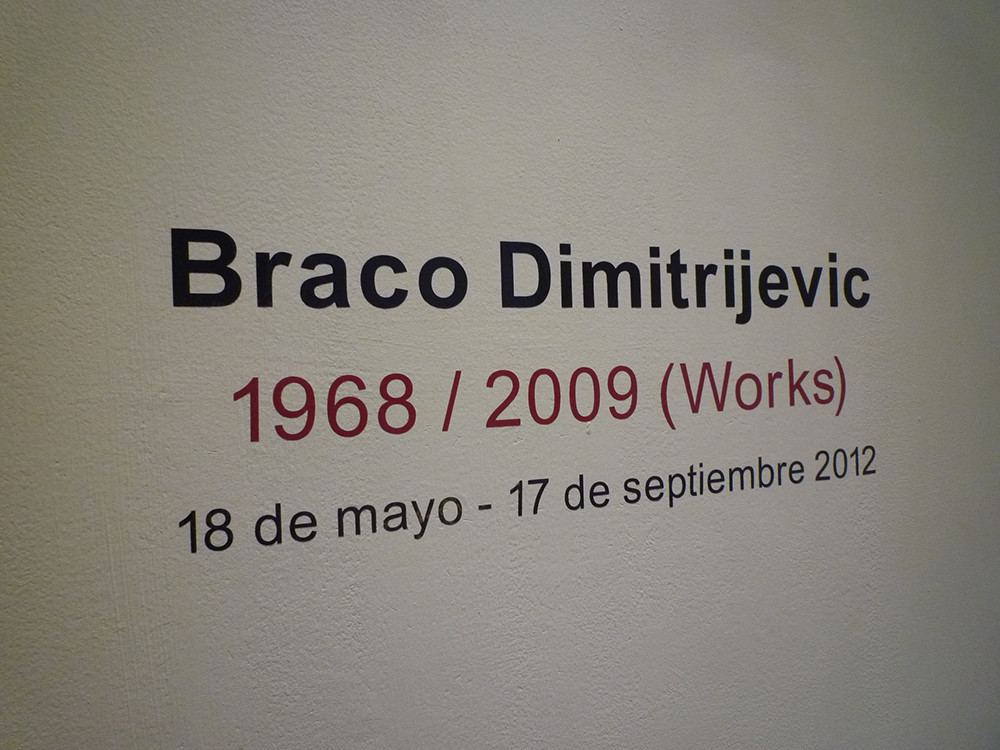 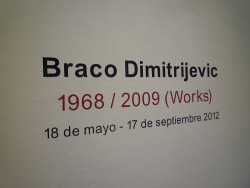 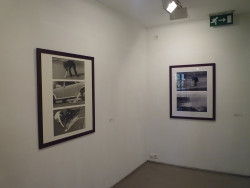 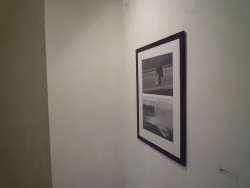 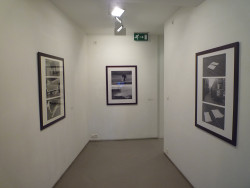 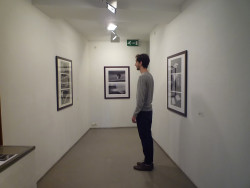 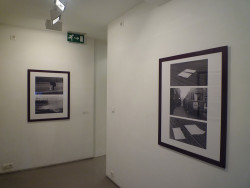 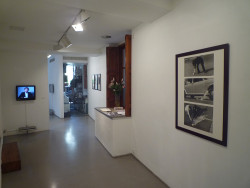 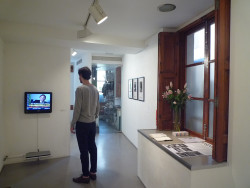 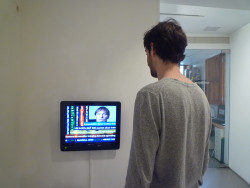 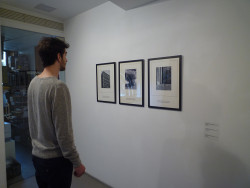 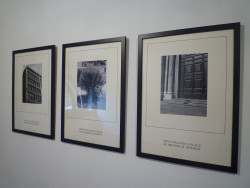 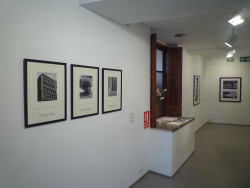 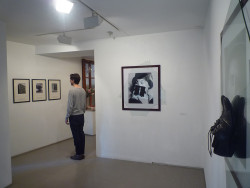 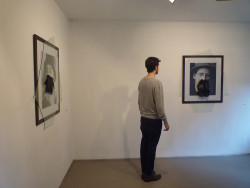 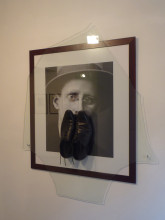 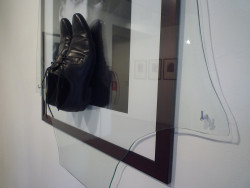 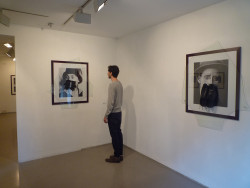 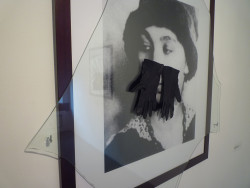 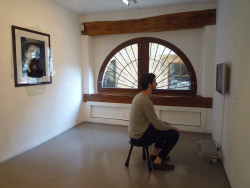 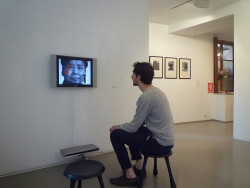 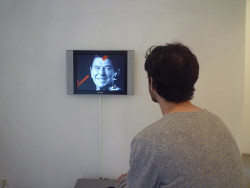 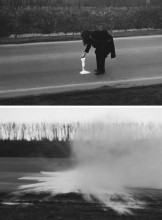 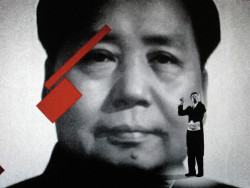 Braco Dimitrijevic is a seminal artist of conceptual art who gained international reputation in the seventies with his Casual Passer-by series, in which gigantic photo portraits of anonymous people were displayed on prominent facades and billboards in European and American cities. Dimitrijevic also mimicked other ways of glorifying important persons by building monuments to passers-by and installing memorial plaques in honour of anonymous citizens.

Braco Dimitrijevic’s first Casual Passer-by work was made in 1969: he started promoting without obvious reason the name of a person he met by chance. This work was followed by an action of carrying placard with a photograph of an unknown passer-by.

In spring 1971 a group exhibition provided Dimitrijevic with opportunity to realize a few years old project. On the main square of Zagreb, where posters of prominent politicians usually hung on state holidays, Braco Dimitrijević installed the portraits of three unknown people whom he has selected randomly on the street.

Simultaneously to appearance of Land and Earth Art, which searched in nature an alternative to the institutions of gallery and museum, Dimitrijević chose the urban space for his artistic interventions. Differently to natural landscape, the city is charged with historical and ideological meanings; Braco Dimitrijevic counteracts this by displaying the portraits of casual passers-by without in a public space without any accompanying information. The space for the artist’s proposition opens up in the observer’s act of mistaking the images for representations of politicians or media celebrities.

The artist opposes a random meeting - the chance, to the determinism of history. He hopes to change our uncritical acceptance of the city’s persuasive language and the unquestioning attitudes towards the mass media and history. The casual passer-by is a metaphor, a poetic disturbance in the established order of things.

In Dimitrijević’s vocabulary, he also stands for an open possibility, for undiscovered or unrecognized creativity: “Every time when I stop a casual passer-by in the street, I believe that I might be meeting Leonardo. And if he proved to be Leonardo, I would not lose hope of meeting Leonardo and Einstein together in the next person."

The artist chooses a casual passer-by as subject to be monumentalized with intention of creating an alternative to official history, a process which he named the Post History. In order to mimic the official forms of glorification, he uses photography alongside the traditional media like marble and bronze, pioneering in this way the post modernist attitude.

The shifting of meaning of forms such as large portraits, monuments and memorial plaques, had a strong influence on art of the seventies and eighties, as well as on the current neo conceptual artistic practices.

The first part of Braco Dimitrijevic’s motto “Louvre is my studio” refers to cycle of the works initiated in the mid seventies under the generic title Triptychos Post Historicus: he started incorporating in his installations original master paintings borrowed from a museum collection.

These are three dimensional still lifes consisting of an original master paintings, usually borrowed from museum collection, an everyday objects and a natural element - fruit or vegetable. In these compositions, which the artist calls also “constellations’, the painting represents high art, the object everyday life whilst fruit stand for nature.

Dimitrijevic made his very first triptych in 1976 at the Berlin Nationalgalerie with paintings of Kandinsky, Picasso, Manet and Mondrian.

The Triptychos Post Historicus realized in numerous museums around the world unite in a harmonious synthesis high art, everyday objects and fruit. The artist’s statement “Louvre is my studio, street is my museum” expresses both the dialectical and transgressive nature of his oeuvre.

With Triptychos Post Historicus the artist revisits both history of mankind and history of art, creatively incorporating masterworks such as Leonardo’s “Madona, Saint Ann and Jesus”, Malevich’s “Red Square”, Rubens’ “Rape of Europe”, David’s “Death of Marat” or Turner’s “St. Benedict, Looking Toward Fusina” into new visual and conceptual structures.

Text on the exhibited works

The Espaivisor will present works from different phases of the Braco Dimitrijevic’s oeuvre.

In the second half of sixties Dimitrijevic began his interventions in the urban environment involving the participation of people on the street. In the works Accidental Sculpture (1968), Accidental Drawing (1968) and Sculpture by Tihomir Simcic (1968) the artist would set initial situation that would be completed by casual action of people passing by.

With his idiomatic wit Dimitrijevic places these discreet effects of everyday urban dynamics under beaux-arts categories. In one occasion the artist installed a heap of plaster of Paris on the road, waiting with a camera. When a car passed by the cloud produced was photographed and entitled Accidental Sculpture (1968). Dimitrijević insisted that, despite its short life which lasted until the cloud fell or dispersed, this work had all the traits of sculpture - it was made from the most common sculptural material and had perceptible volume.

Painting by Krešimir Klika (1969) is a key work from this period. Dimitrijević installed a milk carton on the street, waiting for a car to run it over. He stopped the driver and asked his judgment of the milk splash. If the driver assessed the white stain as art, he would be asked to sign it directly on pavement. This work implies imply a fundamental change in the notions of authenticity and authorship. At the moment the driver agreed to sign the milk splash, the authorship shifted from Dimitrijević, who set up the situation, to the person who accomplished the action. Simultaneously to Roland Barthes’ essay on “The Death of the Author”we withness the birth of Kresimir Klika, the artist and the spectator in one.
In 1969 Braco Dimitrijevic wrote:

“In these series of works the artist only arranges the initial situation, the development of which depends of chance, understanding and approval of other persons. When entering a gallery a visitor is prepared to see works of art. I have tried to chose people at random, without knowing whether they have an affinity for art and make them not only the spectators, but persons who cooperate with the ‘arranger’ , i.e. create. They have thus been included in the act of creating and the dividing line that formerly existed between artist and non-artist has been removed”.

“After all,” Catherine Millet would write later on Dimitrijevic’s artistic strategy, “this voluntary self-cancellation of the artist is a fitting strategy for making obvious the necessity of his action in a society that no longer knows what place to allot the artist. In the eighties, during which this place, unlike the seventies, was so well defined that it was made banal, we saw a certain number of artists going back to this model of disappearance and hiding behind pseudonyms, initials, or enigmatic company names."

In 1971 Dimitrijevic started series of photographic works “This Could be a Place of Historical Importance”. In this work the artist took pictures of randomly selected locations, varying from a romantic corner of the countryside to a monumental staircase, from an ordinary house facade to an interior, and equipped them with this subtitle. He used this conditional statement both for places of unquestionable importance and for totally anonymous sites. There is a considerable suggestive power in this simple sentence: it can trigger the imagination, which will make some bush in the park into the scene of a mysterious affair or even a murder. An anonymous suburban interior can be the scene of an important meeting, or the shot of a shabby painting studio can recall both the mystery and the misery of genius. The sentence can mean at least two things; that any place can in the future become the stage of an important event, or that some event has already taken place there, but its importance is still to be recognized. It implies that all places are of potential historical interest and simultaneously calls into question the category of 'historical importance' as such. The artist's intention is to provoke the spectator to entertain doubts about this notion, this being the first step towards emancipated thought and independent judgment.

In the early 90s Dimitrijević started a new cycle of works with portraits – this time not of anonymous people, but of a well-known artists and scientists. As in the rest of Dimitrijević’s oeuvre there is a paradox: the faces of the illustrious men are much less known than their achievements which makes their portraits nearly as anonymous as those of passers-by.
The personalities chosen are creative individuals, who are today commonly recognized as geniuses, but were ignored during their lifetime. Dimitrijevic poses the question why were Kafka, Malevich, Joyce or Gontcharova isolated, unknown during their lifetimes, then discovered and glorified years after their deaths. A work dealing with this theme was shown at the Israel Museum in Jerusalem. Remembrance candle were burning in front of their portraits in the memory of all the geniuses rejected because of the inertia of human spirit.

The fact that certain ideas had to wait centuries to pass through the filters of acceptability, inducts Dimitrijevic’s critique of the social refusal of new ideas.

Espaivisor will also show 2 video works by Braco Dimitrijevic:“Resurrection of Alchemists”, 2006 (currently also on view at Tate Modern in London) and “Century Behind Me” (2009).

“Resurrection of Alchemists” is a witty and poignant critique of the perpetual loss of artistic freedom because of ever increasing tendency to identify art with its exchange value.

In this video Dimitrijevic, in a role of culture television presenter, raises his lonely voice, defending the immaterial nature of art, the fact that “art has always been spiritual good and cognitive process, that from the Lascaux to modern times it was expression of the most profound strata of human spirit”.

Whilst medieval alchemists were only striving to find a stone that will turn everything into gold, contemporary stoke exchange wizards, literary managed to do so.

The sharp humour with which the artist addresses the acute ethical debate on art as well as his inspired use of computer animation, in tune with the language of the media employed, makes “Resurrection of Alchemists” masterpiece of video art.

In “Century Behind Me” (2009) Dimitrijevic comes back to his early theme of gigantic portraiture as authoritarian symbol. Politicians who have dominated 20th century, leaders and heads of states- are submerged by art and music: transitory worldly power of those men and women, is balanced against discreet but eternal power of creativity. 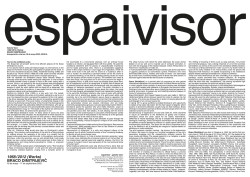 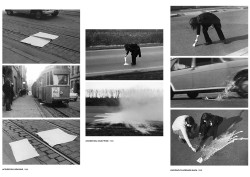