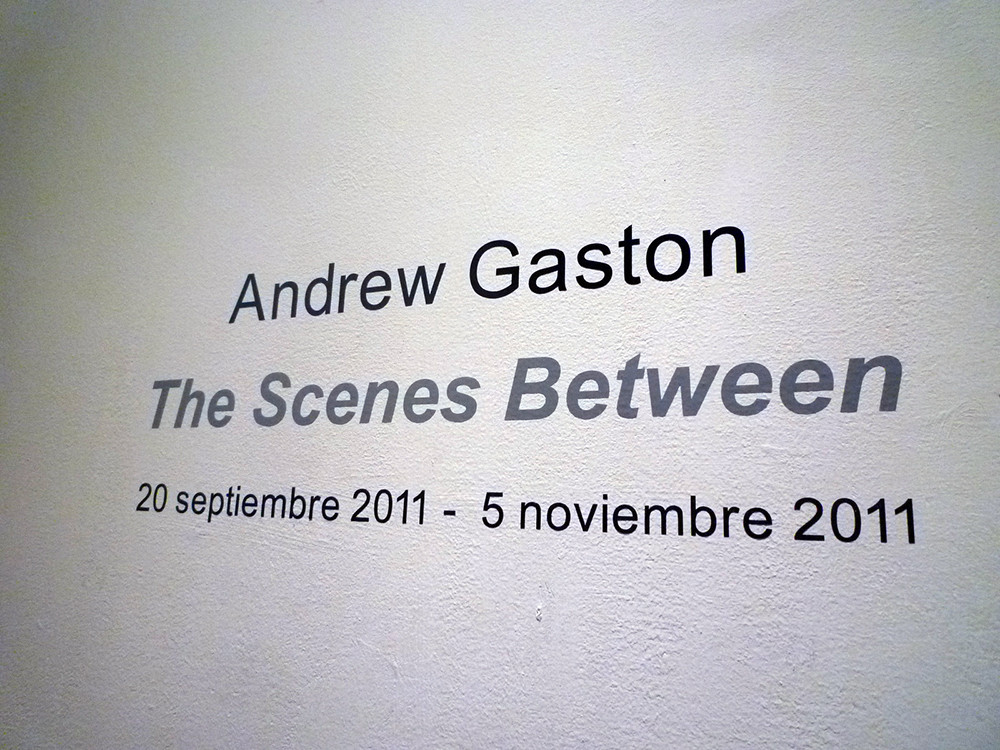 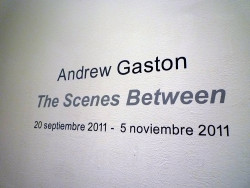 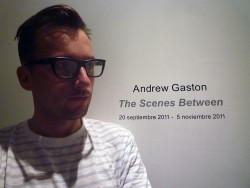 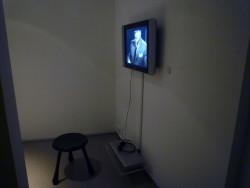 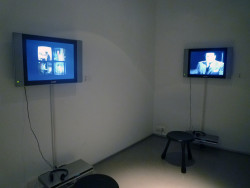 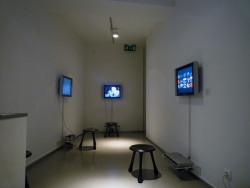 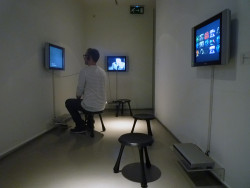 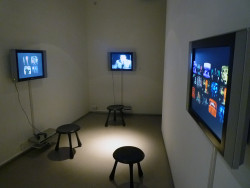 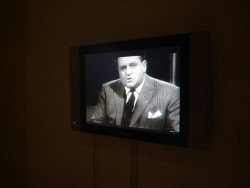 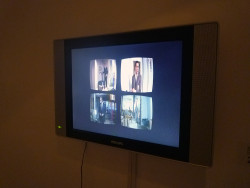 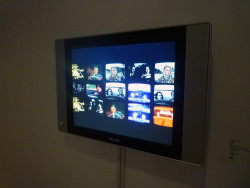 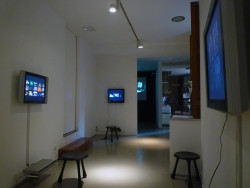 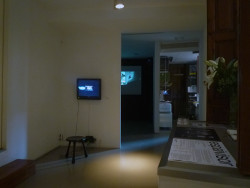 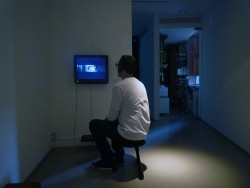 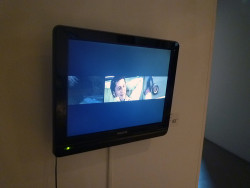 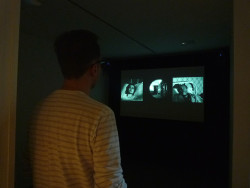 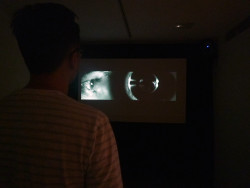 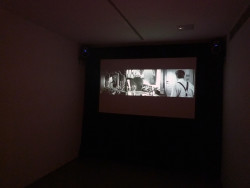 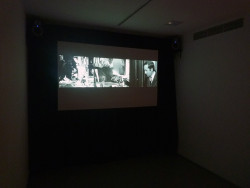 SCENE: A very small hall, from which there is no egress save through a doorway, a figure passes through, stepping into a darkened bare looking apartment in which there is another doorway leading onto a hallway with yet another open door.

It’s as though you are in a dark room like this one,
and you wanted to turn on the light.
But you couldn’t because you didn’t know where the switch was.

You may never know why turning that switch
makes the light go on.
But you don’t have to as long as you know where it is.”

Andrew Gaston here produces another multi-screen work using appropriated film clips. Here the work is made up of clips from a selection of over fifty black and white films. In a pattern matching of sequences, Gaston has created an ever-shifting composition which creates a momentum of unending suspense. Shadow filled rooms, corridors, doorways and staircases form an inescapable labyrinth of domestic interiors, in which each thread acts as an incomplete story.

Unrelenting claustrophobia is contrasted with the continual threat from an unseen world. Is the intruder assassin or saviour? As the shadow persistently tries to visit - there is an absence of any denouement.

Listening at doors, peeping from curtains, going from room to room and checking locks - who or what this domestic turmoil is aimed toward is not shown.

This principle, already put in place by the original narrative is carried further. The space between shots becomes sutured by Gaston and by this approach the work is transformed into a game of knowing and not knowing, of anticipation and assumption.

In a failing chain of communication, the buzz of the intercom, the ring of the telephone or the knock at the door, the dreamer still cannot awaken.

A telephone receiver swings on it’s flex adjusting to the time of a clock’s pendulum.

A light bulb swings in a brick basement and an impenetrable shadow lurks beneath a spiral stair.

The material Purgatorium is formed from is predominately film noir from the forties and fifties, collaged into sequences of confining imagery, sometimes empty entirely of narrative. Other sequences seem like silent prayers or allegories on the themes of time.

A hand turns back the clock and we travel past multiple scenes featuring characters trapped somewhere on the edge of sleep or stupefied by nightmares.

The space between these scenes is punctured by the occasional attempt to break off, to start over. Sometimes the screen switches from three to two screens and the structure of the work is again rebuilt.

Wide expansive shots reveal an array of empty sets and opulent decor, crossed with the stark shadows which mark them as ‘non-memory’ images. These fragmentary frames not only have an emotional resonance, they also served as wardens of imminent horror in their original context. Other halls and rooms are as basic as they are ubiquitous and lit in an utterly conventional way, exuding their fakeness through the act of repetition. Again the original frames of film are copied and recopied and new meaning is formed from these spaces as a result. We have time to gaze and wonder at scenes that were once only momentary preludes to the ‘main event’.

Narrow framings of focus centre around hands with different purposes, their wanderings delicately probe for clues, occasionally invisibly or gloved, then tension is dismissed with a slackening of the grip. The hands lie still and dead.
Gaston was commissioned by artist and curator Michael Curran to close his intervention project ‘Hovel’ in 2010, in which his London home was taken over by a succession of artists on a monthly basis for a whole year. Purgatorium was the result. All the windows of the Curran household were duly blacked out and a specially made screen installed to bisect the main living space. The front door was either securely locked with all shrouded in darkness, or on busy days the intercom buzzed throughout the screening, synchronous with the soundtrack and humorous since all doors of entry were usually thrown open for the day anyway. Domestic appliances also playfully interacted with the art, a dripping tap or a ringing phone added a satisfactory or perhaps even comforting reality to the show at Hovel.

Purgatorium has since been shown as a single screen work at venues including the Pompidou Centre, Paris and at film festivals across Europe and North America. Here at espaivisor it is again presented in its original installation format.

If one looks at Gaston’s work in view of his re- appropriation of film imagery then, along with sound, it represents only one of several levels of appropriation.

Two formal aesthetic tendencies can be seen at first glance. On one hand, it’s a catalogue of motifs and film language, materially resting on Hollywood and European cinema as well as television traditions. Then it’s a kind of atlas of images and gestures to a new code of film language.

On the other hand, Gaston’s audiovisual appropriations turn up in less serially structured form, appearing within the poetics of dream and memory. Fundamental ideas about film are fragmented and become reorganised, often allegorically. His work challenges concepts of narrative cinema through the use of discontinuous montage, where emotional border zones in particular are explored.

His structural archiving work provides firm foundations for his art as does his live audio-visual work, most recently he performed at the British Film Institute in London.

Andrew Gaston is a freelance film director and artist living in London who works a great deal with appropriated or ‘found footage’.

Other multiple screen works by Gaston in this vein are available for viewing on request. 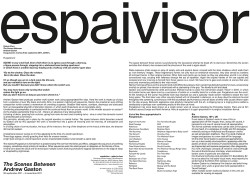 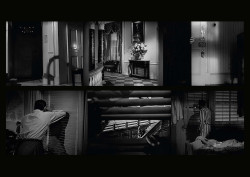